Learn some Facts about the National Trivia Day

Are you one of those quirky people who love throwing in a few random facts about trivial things? Like, high-heeled shoes were created originally for men, lobsters have blue blood, or how sarcasm can promote creative thinking. There is a national day for all the trivia nerds who love collecting random irrelevant facts and data. The 4th of January, every year is observed as trivia day across the US. 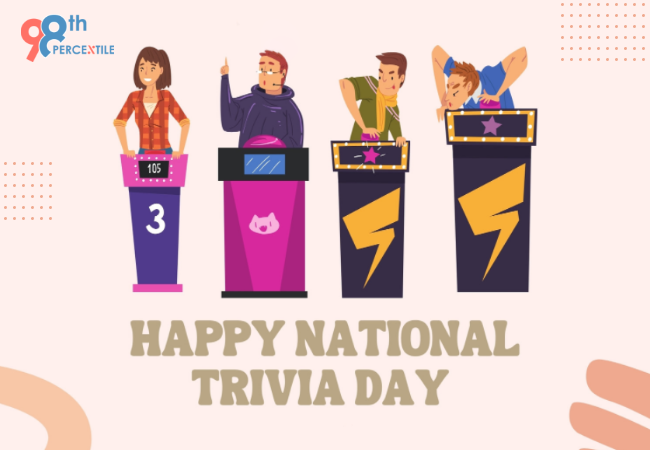 You must be wondering when and how did it all start? Trivia is loved by people, as it’s been a part of pop culture for ages, trivia night was ordinary at all the parties and was a way to start conversations. The first-ever book based on trivia named Trivialities: Bits of Information of Little Consequence by Logan Pearsall Smith was published in 1902. Now, there are hundreds of books and trivia encyclopedias available today to indulge in playing trivia quiz. Trivia as a pastime became popular in the 1940s in the US, because of a popular trivia-based radio program named Take it or Leave it which involved players answering random trivia questions for prize money. It became a thing, and in the 1960s people started playing trivia-based contests in college as well. With trivia gaining all the excitement all over the country, in 1979 Chris Haney and Scott Abbott created a board game -Trivial Pursuit, which became famous worldwide. Later, from 1980, the national trivia day was celebrated every 4th of January.

The craze for trivia is only increasing, people enjoy playing a good trivia game or quiz. According to a mobile trivia game app “QuizUp” data, the average person spends 40 minutes a day playing the trivia. Let’s celebrate the national trivia day by indulging in a fun yet informative trivia. Here are some trivia questions for you curated by 98thpercentile. To know more about our classes, book our free trial class today!

1) What geometric shape is generally used for stop signs?

2) The unicorn is the national animal of which country?

3) What is the official nickname of Texas?

4) Where is Bermuda Triangle situated?

Answer: In the western part of the North Atlantic Ocean.

5) What is the other word for Lexicon?

6) Which place on the Earth is the coldest place to live?

7) How much water is present in a water melon?

8) Which fish will evaporate if left in the sun?

9) How many key are there in a piano?

10) When was the USA discovered?

11) Who wrote Charlie and the Chocolate factory?

Answer: The speed of a computer mouse