The Cognitive Abilities Test is a standardized test administered since 1979 by one of the largest publishers in the US, Riverside Insights. It is offered both as Group-administered as well as Individually administered tests. Riverside Insights, then the Riverside Press (1852) the 19th century publisher, among many firsts, took a radical decision to employ men and women side by side. There is no looking back ever since! Riverside conducts many tests and this blog is about one among them, the CogAT. It is very different from an achievement test. 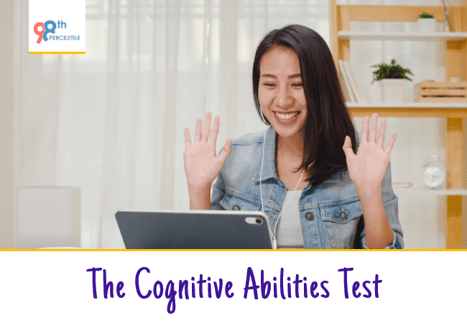 So, who takes this test?

CogAT is administered to students from Grade K to 12; Age 5 to 18. Most schools in the US use these tests to assess a student’s academic aptitude and gifted abilities. If a district school does not use this test or if a student is home schooled, or goes to a private institution, individual testing is also available.

Historically, the CogAT is a go-to test for educators to identify skill sets, gaps and plan according to a student’s level. The test also helps in identifying gifted and talented students. So, practically any student from elementary or secondary or high school can take CogAT as it provides the ability profile.

Let’s take a deep dive into Cog AT components.

The Cog AT is about profiling the ability of a student. The picture, from Riverside Insights, gives an idea of how elaborate the report of a student’s profile of the general reasoning ability in three domains verbal, quantitative and non-verbal is.

The following table shows the grade and the corresponding test level a student may appear for. There are 10 levels and correspond approximately to a certain age of a student.

When is it available?

The dates for group administered tests are decided by the schools. However, the individually tested ones are ongoing tests that can be registered for with Riverside Insights.

Why take it as early?

The reasoning abilities develop and change over time and are good predictors of school success. The earlier a child is exposed to problem solving, there is a direct correlation to brain development. Since this is not an IQ test, the success depends very much on the amount of practice a student is willing to subject themselves to. The more one thinks about these the brain learns to think strategically, out of the box. As the name rightly states, this tests the boundaries of cognitive abilities of a student.

The scores obtained from CogAt opens up additional opportunities at universities and colleges that run centers for talent development and nurturing, like the CTD at Northwestern or CTY at John Hopkins or Michigan State University GATE, just to name a few. Be it courses or summer programs, CogAt is the score.

98thPercentile is organizing a free webinar on cognitive ability test for parents with children in grades k-12 on April 23rd, 2022. If you are interested and want to know more about CogAT then, feel free to register today!