Learn with 98thPercentile, how to solve Hard Math Questions

There might be a question bugging you for a very long time. If that virus did not infect your brain cells, it will definitely infiltrate now because I have a very basic and yet complex question. 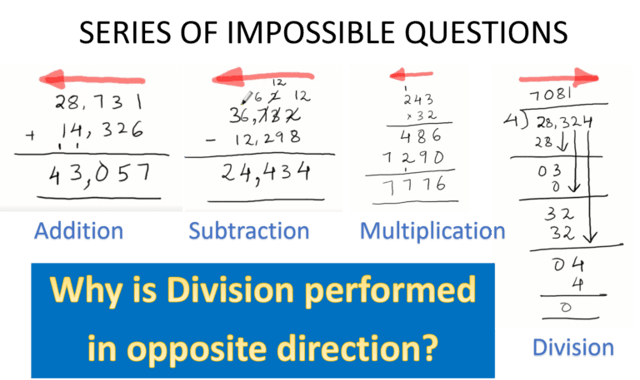 Whenever we do addition, subtraction, or multiplication, we start from right and progress towards left. That is, you would add the right most numbers first with the lowest place values first and then keep on moving left until the problem is solved. But have you ever noticed that we do the opposite for division.

Indeed, when you are dividing a number, you start from the digit with the highest place value and then go down the line. But why?

Check out our video on how to solve hard math questions:

For those of you who get dizzy looking at this much text, you can jump to the Youtube Video: https://youtu.be/WGfVtVDMP58

When we are add numbers, lets say that we are adding two numbers 27 and 48. Lets go the wrong way around. Lets add the tens place first. We have 2 groups of ten candy in the first number and 4 groups in the second number which makes a total of 6 groups. Now, lets go to the lower place value and do the addition. We have 7 loose candy in the first number and 8 loose candy in second number. Add them and we have 15 candy. But we know that we can pick out 10 candy and make it into a new group. So, we have to redo the tens place addition. Don’t you think it would have been convenient to start with ones place and work your way up as the groups keep on piling. Hence, we add from the lowest place value to the highest place value. The same goes for subtraction and the same goes for multiplication.

Lets apply the same approach for division and go the wrong way around to see if the operation still works. Let us say that we are dividing the number 54 with 3. We know that dividing is distributing among people. Lets start with the ones place. We have 4 candy and we have to divide it among 3 people. We give one candy to each kid and so we have one left as remainder. Now, we move on to the tens place. We divide the 5 groups of ten candy in such a manner that each child gets one group of ten candy. Now, we have 2 groups of ten candy left. We have to break this group into loose candy and add the one remaining candy to make 21 loose candy. Now, we can divide it as 7 candy for each child. It feels better to go according to the convention and first divide the larger pool and break down the remaining into the smaller pool. Hence, division has to go the opposite direction.

In conclusion, if we go the wrong way around in these operations of addition, subtraction, multiplication and division, we end up doing the process multiple times. This makes the process lengthy. Hence we follow the standard direction and convention to make our life easier.

If you want to learn the best and easy ways to solve these hard math questions, book a free trial class with us today!