Comic Strip- The most creative art of storytelling

Speaking of books, comics are an integral part of everyone’s childhood. There is hardly any child who does not like to read or skim through the graphics of comic books. Some are voracious readers, for sure. The comic books are packed with interesting visuals and dialogues that convey stories in an engaging manner. Even if children read comics just as a hobby or a pass-time, it does have some good benefits to offer. Comic books promote higher order literacy through the art of visual storytelling amongst the readers. They have also become a medium to discuss difficult societal topics to create social awareness. 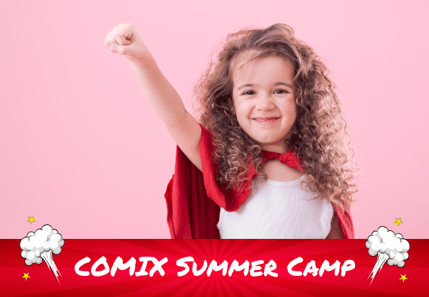 Stories in just a couple of frames?

Why not! Anecdotes, for example, can be written in a few lines to add a layer of storytelling to the whole scenario. Similarly, one can illustrate an entire story in less than six frames, with few to zero dialogues. The amount of creativity that goes into them is incredible. The frames are limited, the dialogue needs to be shorter, sharper and apt to build a character’s personality. The comic strip is the most creative form of storytelling since it makes the most of the frames in order to portray a complete picture without a prologue, as in a traditional story. The comic thrives on the human mind’s capability of expanding a picture, creating an out of the world experience.

Comics gained huge popularity in the 1930s with superhero genre coming into the limelight. Superman and Batman set the benchmark for every other action/superhero genre. Even before gaining popularity comic strips used to regularly appear in the newspaper from the year 1895. Beginning with The Yellow Kid, the first newspaper comic strips were collated into books. Most of these comics got so popular that they got adapted into motion comics/television programs. Field of comics has evolved so much that the Academy award equivalent, The Eisner Awards (since 1988) has not only brought out best comic talent but also encourages academic work and honors comic experts.

With millions of comics of different genres published for all ages, there is one comic for everyone. Children especially are drawn to comic books as they are quick to read and offer great food for their imagination. After reading a comic strip, a child's imagination is unfurled, and they feel like superheroes. Who has not seen a child play with a cape on! Comic books are known for their bold and bright graphic art; they are a child's favorite that makes for a better reading choice than the regular prosaic novels. A simple stroke can hit the right emotion and bring the characters to life. Unlike novel writers, comic artists use limited space to their best advantage to make stories simple, understandable, and yet quite intriguing. It is a false notion to think that creativity cannot be nurtured, a self-imposed limitation can give birth to a creative mind.

Children are born creative because they are not restricted by the laws of physics or formulae of math yet. So, they are able to build wings out of ash or tall shapes out of water if they choose to. Making comic strips a great way to encourage creativity in young minds as they allow them to express themselves freely with characters, visuals and designs which is very exciting to a child.

Comic strips- a perfect mix of art and writing!

Creating comic strips is a unique and most creative form of art as it combines literature, visuals, and dialogues to unfold a compelling story in the mind of a reader. Quite a medium to express figments of imagination in a creative way! No wonder one can just look at the graphics of the comics and come up with a multitude of creative possibilities, the power of visual storytelling. What better than the most innovative and impactful work of comics like time tested Calvin and Hobbes or the more recent Ghosts can vouch for this! Even a single well-illustrated graphic in the comics speaks worth more than a thousand words.

Limitations, the mother of all creations

People from various fields have proved that constraints can bring the best out of them, producing the most unique work by far. Comics are a great way to storytelling with minimal words and precise sketches of unique art styles. It requires one to have impeccable skills that, when there are just 5-6 boxes to define a story with visuals, compels one's mind to think outside of the box. The novel or short story writers express the emotions in particular and events in general in so many words and sentences while comic does impose a huge limitation to that. This constraint makes the mind highly creative to draw and write with minimal words or phrases and communicate very effectively, sometimes even without words! Well duh! The comic strip certainly is the most creative art form of storytelling. 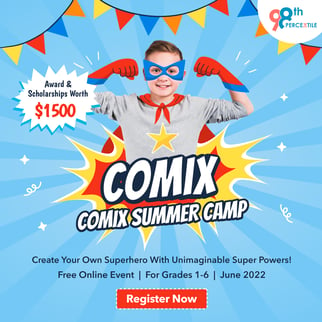 98thPercentile’s Comix Summer Camp is a fun blend of Storytelling & Designing skills. It is an excellent opportunity for students of Grades 1-6 across the United States to utilize the summer vacation to develop new creative skills. Register Now for our Comix Summer Camp!