My parents always advised me, as a youngster, that I should study some basic coding to have a feel for it. I’d heard of Java and Python, but not of Scratch. As a result, I studied more about it. I learned, Scratch is a well-known coding community for youngsters all around the world. And, millions of youngsters use scratch across the world to build their own interactive stories, games, and animations, which they then share in an active online community.

I liked it and explored it further. I read that Scratch is a visual programming language established in 2007 by the MIT Media Lab. Its colorful blocks, drag-and-drop interface make it one of the easiest programming languages to learn. Unlike traditional programming languages such as Python, which requires the programmer to type out the code, children and adults can effortlessly develop interactive games and programs by linking code blocks on Scratch.

Even though Scratch is best suited for kids aged 8 -11, older children and adults can still benefit from it. And for youngsters aged 5-7, Scratch Jr is a suitable alternative. Its features are simple, and it has a more intuitive platform than ordinary Scratch. In short, Scratch is an approachable and welcoming introduction to coding for anyone with no prior computer science background. Besides, people use Scratch and other related block-based languages while beginning computer science classes at various institutions. 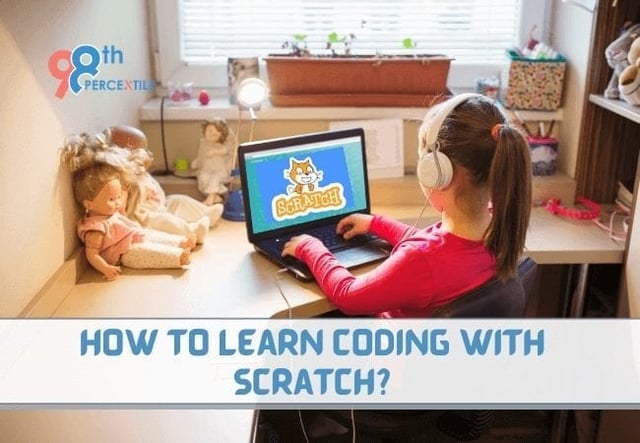 Text-based coding languages, on the other hand, are just like human languages. They have their own grammar and vocabulary, as well as unique ways to create distinct commands. And these commands are instructions directing the computer on what to do. However, this learning curve might upset inexperienced developers

So I joined 98thPercentile to learn Scratch programming. They assisted me in learning more about Scratch, and I practically experienced what I had read. I also learned the following in my journey of exploring Scratch.

All I can tell is, learning to code with Scratch helps youngsters enhance a range of critical life skills. In addition, it is an excellent starting point for anybody to delve into the world of coding. We develop our abilities while exploring the endless possibilities for projects in Scratch.

Watching YouTube tutorials is also one of the methods to learn Scratch. When it comes to studying, YouTube is one of the most dependable resources on the internet. Many professors and educators share their expertise by broadcasting it on the internet, which serves as a video network. If children wish to learn a particular code, they may do it on YouTube.

But I would still recommend 98thPercentile, to experience the fun and interactive guidance given live by expert teachers. Try our free trial of online classes today!

While exploring various things on Scratch and learning how to apply each of them, I taught one of my school mentees how to build a Pong game using Scratch and explained some of the fundamentals to him. That was my proud moment!